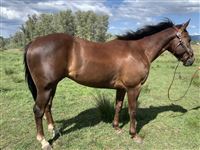 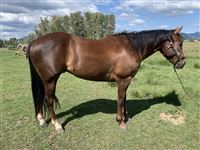 Dashin Ta Lena “Zydeco” is a 5 year old gelding by Blazin Jetolena LTE 95,201 (Produce earnings in excess of $2 million) out of a Dash Ta Fame x Merridoc mare. This cross needs no introduction. Several NFR qualifiers and arena record holders are full and 3/4 siblings to this horse. Zydeco is PIF to Future Fortunes. He shows the same promise in the barrels and poles. We have had since he was a yearling. He was started by a Reiner and is BROKE BROKE BROKE. Spins both ways, changes leads, stops hard. He is a Cadillac to ride and easy to run. Doesn’t shoulder, goes in the gate, and very honest. He rides exactly where you put his feet and loves his job. Wicked in the poles and makes efforts not to hit. This horse could easily be a 19 second pole horse. Started in the breakaway and heading on the sled. Good to rope on and knows his spots. He has limited runs due to his owner being pregnant most of his four year old year. He’s been cruising in the 2D with tough horses. Zydeco is easy to catch, hauls great, and is UTD on all regular vetwork. We love this horse and see such a bright future for him.